Aprilian Reviews: #2 - The House of the Spirits, Isabel Allende 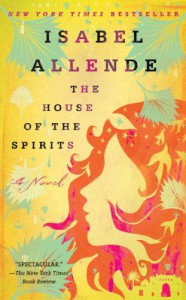 I was reluctant to read this. It's one of those books for which you catch yourself always saying "yes, I'll read it, but not now", because of all the hype about it and first of all all the hype about Isabel Allende. It happens a lot with me: when a book is praised by everyone, I feel always an hostile force between the book and me, maybe because I'm afraid of not liking it, feeling incompetent, given that not sometimes, but often my opinion about a praised book ends up being against the tide. In these moments I don't feel proud to be anticonformist, on the contrary I feel often uncomfortable.

The House of the Spirits was a recommendation by a GR user, who has prompted me to overcome my hesitation.

And.. all's well that ends well this time!

I liked very much the story: compelling, similar to a chock-full flower bowl, its events are like those fireworks which seem destined to gush eternally and with the same energy as the first instant and your eyes are hooked into the movement, pending.

There never was a moment of boredom and almost all the characters were likable, even those characters like Esteban Trueba whose list of virtues and vices is not very equal and not pending on the positive side. Allende in fact has chosen him for being one of the main voices and not casually, allowing him to explain himself particulary in those behaviors which paint him like a violent jerk. I always like sympathetic tones in novels and in this case it has made me hope for the best for many of the characters. I've really felt inside the story, and Allende's brief and apparently casual anticipations really helped to tickle the long of knowing more and turning pages and pages and pages..

The metaphor of fireworks doesn't allude to the idea of wonderful events on wonderful events waiting for Trueba family, there is a lot of suffering, blood too. But the element of magic realism (so well inserted and managed!) with spirits always as vital as human being, a tangible part of the house and living there almost naturally, was really the magic touch of Allende's recipe. This is a well-executed example of magical realism.