Reading Montaigne: Chapter XIV (That the relish for Good and Evil depends in a great misure upon the opinion we have on them) 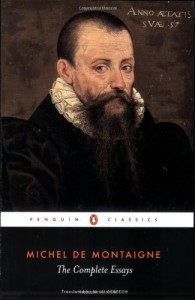 "There is but one truly serious philosophical problem and that is suicide. Judging whether life is or is not worth living amounts to answering the fundamental question of philosophy. All the rest – whether or not the world has three dimensions, whether the mind has nine or twelve categories – comes afterwards. These are games; one must first answer." This is not a quote from Montaigne's Essays, but the opening of "The Myth of Sysiphus" by my favorite philosopher, Albert Camus. Even if I appreciate immensely Kant's revolutionary theory about mind - for example -, I will always be more grateful to those drawers of philosophy which offer a way for living and surviving too. Montaigne didn't talk specifically of the most acceptable reason to keep living (like existentialists indeed), but I love him for all those little suggestions for dealing with life without getting..crazy. I could say that he suggests a way of surviving day by day, againsts all those big and little enemies who put our resistance to the test.

Like he says, pain surely is one of them, how many people kill theirselves because of the unbearable pain?

Besides, this ought to be our comfort, that naturally, if the pain be violent, 'tis but short; and if long, nothing violent:

Thou wilt not feel it long if thou feelest it too much; it will either put an end to itself or to thee; it comes to the same thing; if thou canst not support it, it will export thee.

A friend of mine said one day a thing that I have not forgotten yet: "you know, I think that we won't feel nothing that we couldn't bear." Like an Elisa's song: "Forgive and you'll forget / though it may make you feel bad in fund, you know that you'll still here
and give everything, and give as much as time in which you'll scar will remain / The sun dissolves this node as it does it with snow". And like Montaigne himself said, violent pains are destined to decrease. Then surely comes the mind, and how we are good at torturing ourselves generating almost with pleasure killer-thoughts for our soul. When we have nothing in the hands but pain, we grow fond of it, we don't want to let it go because otherwise it would be like we wouldn't have nothing to mess around with. A pain that finishes is a pain less dramatic, unbearable than we've thought, it's like demystifying ourselves and this is not surely pleasant for our ego.

'Tis plain enough to be seen that 'tis the sharpness of our mind that gives the edge to our pains and pleasures: beasts that have no such thing, leave to their bodies their own free and natural sentiments, and consequently in every kind very near the same, as appears by the resembling application of their motions. If we would not disturb in our members the jurisdiction that appertains to them in this, 'tis to be believed it would be the better for us, and that nature has given them a just and moderate temper both to pleasure and pain; neither can it fail of being just, being equal and common. But seeing we have enfranchised ourselves from her rules to give ourselves up to the rambling liberty of our own fancies, let us at least help to incline them to the most agreeable side. Plato fears our too vehemently engaging ourselves with pain and pleasure, forasmuch as these too much knit and ally the soul to the body; whereas I rather, quite contrary, by reason it too much separates and disunites them. As an enemy is made more fierce by our flight, so pain grows proud to see us truckle under her. She will surrender upon much better terms to them who make head against her: a man must oppose and stoutly set himself against her. In retiring and giving ground, we invite and pull upon ourselves the ruin that threatens us. As the body is more firm in an encounter, the more stiffly and obstinately it applies itself to it, so is it with the soul.

But let us come to examples, which are the proper game of folks of such feeble force as myself; where we shall find that it is with pain as with stones, that receive a brighter or a duller lustre according to the foil they are set in, and that it has no more room in us than we are pleased to allow it:

Like many of us should know, there is a moment when tears are sufficient and keep crying is only a free theft to time. There is a clear border between the necessary tears and the tugged ones. When the tugged ones come, trying to do something would be nice, investing time of your life in action, fighting or making resistance, or even trying to say to the child in us that those monsters under the bed can be turned into something which is more inoffensive than before.

Every time that something is overpowering me I say to myself: "can this thing be redimensioned? how about doing it?".

Woody Allen said it in a different but similar way: let's have a laugh. Humor is always the way. I never take myself too seriously, and, well, I discover a great way of surviving. In fact, one of the last lines of this chapter is:

No man continues ill long but by his own fault.

The commented chapter is avalaible here.